What to Know About Thin-Film Solar Panels: The Lightweight Alternative Solar Option

What are thin-film solar panels and how do they work?

Thin-film solar panels, also called flexible solar panels, are made of one or more layers of thin-film material that absorb light and produce electricity. They're made using amorphous silicon thin film, cadmium telluride thin-film, gallium arsenide or copper indium gallium selenide. They're fast and efficient to manufacture, which often makes them a more affordable solar energy option when compared to other solar technologies.

The thin, flexible, and lightweight photovoltaic cells that make up the panel are only around 1 micron thick (0.001 millimeters), which is only a fraction of the thickness of a penny.

This solar technology can be traced back to the 1970s, when Karl Bower pioneered thin-film solar cell research and created the first solar house, called Solar One. However, it would be decades before interest in thin-film cells would grow enough to result in commercial interest. Today, thin-film panels are still limited in availability and are mainly used in commercial and space applications.

When you think of conventional solar panels, you're most likely thinking of monocrystalline or polycrystalline silicon solar panels. This is because thin-film technology is still more widely used in commercial buildings due to efficiency and space requirements for installation.

Thin-film solar panel efficiency varies depending on the type of material but can be expected to be between 7% and 18%. Conventional panel efficiencies can reach 25%, but commercially available panels typically range from 18 to 22%

Because of their lower efficiencies, current thin-film systems require more roof space than conventional panels, meaning they won't be suitable for a large portion of homes.

The pros and cons of thin-film solar panels

The bottom line: Should you invest in thin-film solar panels?

Thin-film solar panels are still limited in availability, but as solar technologies continue to advance, these panels could take off in popularity.

If you have a larger home or business with adequate roof space, thin-film panels may be the most efficient and effective way to achieve your carbon footprint reduction goals and save money on energy costs. They may also be an adequate energy solution for portable use on things like RVs, buses or boat rooftops.

There are always things to consider before buying solar panels, and your energy needs are only one of those. Think about what your goals are for solar panels and then weigh your options accordingly.

For more information on how to use solar energy to save money, check out four ways to get cheaper solar energy at home and how solar panels save money.

More for your solar-powered home 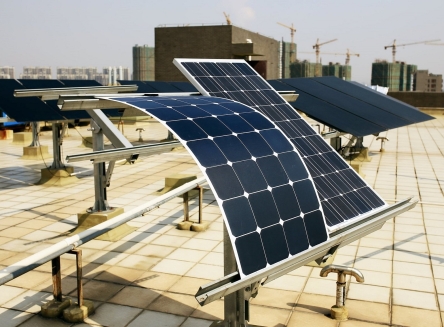